Everything You Need To Know About Fast And Furious 9

In this blog post, we are going to share everything we know about Fast & Furious 9, also known as the F9 story, thus far. The Fast & Furious franchise movies are always unique and offer some unique storylines every time to keep its audience engaged until the end. With the announcement of the F9 release in 2021, the people who were waiting for this action saga for a very long time are finally happy to know about its come back.

Well, the movie was all set to release in 2020, but die to a certain global crisis, the release date of the movie was extended to 2021. In the past 20 years, since the first part of Fast and the Furious hit theatres in 2001, the fame of the movie has grown in huge numbers when it comes to box office collection, and even reviews and rating reception. The Fast and furious franchise always adds something unique it is every segment that attracts quite an audience towards it.

The Fast and the Furious 9 is also known as F9. It is a media franchise film that is based on several series of action films that are mainly about various illegal spies and heists. 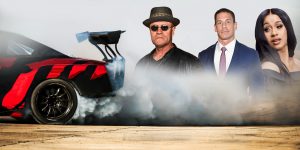 Well, the saga was all set to release in May 2020, but due to certain situations, the movie is all set to release in April 2021. It is finally the time when the wait of its fans will over finally for fast and furious part 9. The 9th chapter of this tale is going to engage its audience once again with its appealing storyline. This F9 saga has endured for more than 2 decades and has earned more than $5 billion around the world.

According to the trailer, Vin diesel Dom Toretto is the leading actor in this film. In this film, you will also witness Letty along with Vin Diesel and his little son Brain. When you first see the movie, you will know that how threats always lurk on their calm horizon. But this time, the danger will force Dom to deal with its past sins for protecting those he adores the most in his life.

To overcome this danger, Dom and his crew work together to stop the world-shattering plan led by the most talented killer and high-performance driver. Yes, they crossways with a man who also happens to be Dom’s isolated brother, Jakob.

This time the followers of the F9 film series will have to wait a lot longer than at first expected. The fast & furious 9 release date is 2nd April 2021. Initially, the film was originally expected to release for on May 22, 2020, but due to the global crisis led Hollywood into a panic, heading the film to be postponed almost an entire year.

Now according to the latest reports, the movie will release on April 2, 2021, in the UK and US. For now, the release date of Fast and furious date 10 is not declared.

The film is owned by universal pictures and this time the F9 is back with some old characters. Yes, the return of its previous characters in the movie makes it an interesting one

According to reports, the Fast & Furious 9 movie written by Daniel Casey. The film is directed by Justin Lin, who has previously directed several other series of this franchise. The director has also signed for Fast & Furious 10, which is supposed to come in 2022.

What is the actual title of Fast & Furious 9?

For now, fast and furious 9 is also known as F9. IMDb has listed it by both the names Fast & Furious 9 and F9, but for promotional material, the F9 name is used.

The trailer of the F9 was released officially in January 2020, but that time the movie was supposed to release in May 2020. But now the fans of this action thriller can brace themselves for the next clip that gives them some more idea about the movie. There is suspense in the movie that you will know when you check the epic trailer for Fast & Furious 9.

The current plan of the franchise is to end these Fast & Furious movies in 2022. In Fast & Furious 10, the director will gear the end of the movie, and the filmmaker will set the stage for the climax shortly.

Suggested: 10 Best Shows on Netflix You Must Watch

In a nutshell, we can say that if a few years back, you were to tell us that Fast and Furious will be a successful film, we might not believe you for this part. But in the current time, we know that this series has created a unique place in the heart of people with its different storyline and characters.

The Fast & Furious 9 movie has become one of the winning franchises in the current Hollywood scenery. The car racing franchise has gradually changed ahead of its street-level origin and shows no terror of adapting to the altering of the times. The way they adapt to changes has made this franchise one of the successful series in the world. Their enthusiasm to alter things has made the Fast and Furious franchise a considerable win for Universal pictures.