The Much Awaited Mirzapur 2 Gets Its Release Date

Mirzapur Season 2 Gets Its Release Date

The wait is finally over, the rustic crime thriller is back with its second season to thrill the fans all around the world. The second season was teasing fans right from the start of this year when the makers released a motion poster online. However, amid these unprecedented times, this news has come as a stress relief for the ardent fans of the series. Mirzapur Season 2 will premiere on Amazon Prime Video from October 23rd, 2020. Its teaser was released a few days back and one could assume that the second season is going to be bigger and better.

Set in the outbacks of Uttar Pradesh, the first season of this enthralling crime drama displayed a sinister, dark, and complex world of drugs, guns, and crime. Ali Fazal, Pankaj Tripathi, Divyendu Sharma, and Vikrant Massey were among the prime protagonist and antagonists who portrayed their roles to the fullest and were highly appreciated by the audiences.

At the end of the season, it was carnage when Munna (Divyendu Sharma) killed Bablu (Vikrant Massey) and Guddu’s (Ali Fazal) wife Sweety (Shriya Pilgaonkar), leaving Guddu hapless. His brother and his wife were killed in front of his eyes and the second season will see how Guddu avenges the death of his loved ones. The 56-second teaser says it all and one could sense that Guddu’s quest to avenge the death of his closed one will take the path of bloodshed and annihilation.

Excited about the return Mirzapur, producer Ritesh Sidhwani said, “Mirzapur was a step in that endeavor. It was not just about breaking boundaries for the audiences, but also for ourselves as content creators. Bringing thrilling and untold stories from India’s hinterland without losing authenticity has been our biggest win. All the praise that season one of Mirzapur has received, not just in India, but across the globe, is heartening.”

The creator Puneet Krishna also shared his feelings. He said, “The love and appreciation that the show has garnered since its launch has been simply overwhelming. Taking it a notch higher, we’re certain that the audiences are in for a visual treat in the sequel. Seeing their excitement for season 2 for months now made each one of us deliver a performance that matches up to the scale at which the show has now placed itself. We are thrilled to take the fans to another dynamic world of Mirzapur that they have been waiting for a very long time.”

According to the Indian Express, the cast of Mirzapur 2 has finished dubbing, in fact, Ali Fazal also shared a picture with his co-stars Shweta Tripathi and Harshita Gaur spotting a face mask courtesy the novel coronavirus during the session. 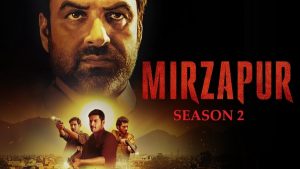 Once the second season was confirmed, one of the producers Farhan Akhtar said, “It is exciting to see that global audiences are responding well to the kind of content we are creating. It started with Inside Edge being nominated for an International Emmy and now Mirzapur being watched and loved across India and globally; we are glad that both shows have been renewed for the next season giving us another chance to showcase Indian stories on a global stage.”

Not only the makers, Aparna Purohit the head of India Originals, but Amazon Prime Video also termed Mirzapur as a “game-changer’. She further stated, “The show heralded a new idiom of storytelling for Indian audiences – its characters have become a part of the popular culture. We are certain that the riveting narrative of season 2 will leave our audiences mesmerized once again.”

Mihir Desai and Gurmeet Singh are the directorial duos of Mirzapur 2 that is produced by Farhan Akhtar’s Excel Media. Once again the likes of Ali Fazal, Pankaj Tripathi, Shweta Tripathi, Rasika Dugal, Harshita Gaur, Amit Sial, Anjum Sharma, Sheeba Chaddha, Manu Rishi Chadha and Rajesh Tailang will be reprising their roles yet again in this crime saga, whereas, Isha Talwar, Vijay Varma, and Priyanshu Painyuli will be joining the cast.

What to expect from Mirzapur 2

Ali Fazal aka Guddu will be returning with vengeance on his mind from Munna Tripathi (Divyendu Sharma) who killed his wife and brother. A small teaser showed Guddu using walking sticks after his injury from the last scene of the first season, elsewhere, Kaleen Bhaiya (Pankaj Tripathi) is regaining control on Mirzapur. The expected turmoil between Guddu and Munna is going to wreak havoc.

Fans Excitement is at its Peak

Right after the conclusion of the first season, fans were waiting for the second season to get underway. It took almost 2 years for the makers to create yet another masterpiece and the promise the teaser has chanted out seems worth the wait.

With the Mirzapur season 2 release date already out, it seems like the next two months are going to be very hard for the fans to see-off.

The return of Guddu, Kaleen Bhaiya, and Munna is what the fans have waited for 2 long years. “When is Mirzapur 2 releasing?” is one of the most asked questions ever since the start of 2020. 23rd October is the date to witness Guddu’s journey of revenge.

Top 10 Outdoor Smart Home Products You Can Buy In 2020