IRRFAN KHAN: THE JOURNEY OF AN ACTING LEGEND

Bollywood has been a home of great stars and superstars but there are actors/actresses who are remarkably known by their charismatic personality, aura and are accoladed all over the globe.

Among the names of the few personalities, a name touches everyone’s heart. Yes, Journey of Irfan Khan. The most versatile actor of the filming industry as he was not clung to main streamline Bollywood movies but made us proud in the British and the American film industry too.

If you are a Bollywood fanatic then, you must be aware that Irfan khan is cited as one of the finest Indian actors of all time. Irfan Khan was among the few handfuls of actors who made their career with their own hard work and the talent he had within. Nepotism is one of the biggest factors for the growth and success of the filming industry but the sahabzade Irrfan khan achieved everything on its own with passion, compassion, and yes, his heart-warming smile.

In 1998, he began the Bollywood journey of Irrfan khan when he played a small role in Salaam Bombay- the movie is said to be his first debut. The role was a small role and then he went through years of struggle. He appeared in a lot of cameos and more.

But in the year 2001, everything for Bollywood and Irfan khan changed as he took a giant leap outside the Bollywood film industry by making his international debut in British director, shot in the mystic lands of Rajasthan- “The warrior”. The movie won BAFTA and then started the true journey of Irfan khan.

Paan Singh Tomar was accoladed and appreciated the whole world as no one could have ever done the role better then Irfan khan.

Though all the movies he cast in were best, either they had a good storyline or has been well-liked by the viewers.

To name the few from this best works include:

Irrfan’s last Hollywood movie is of the drama genre “puzzle”. He played the role of a wealthy inventor and champion puzzler. Though the film didn’t get its Indian release, khan was given due credit for his presence in the film.

His last Bollywood movie is the “Angrezi medium” of the drama genre. The movie is said to be a spiritual sequel to the 2017 film Hindi medium and the movie has been appreciated by the audiences.

As of year, 2017, his films gross over 3.6 billion dollars at the worldwide box office. That is a huge number for a person who has struggled a lot in his life.

Irrfan Khan has worked on several international projects and his home has a section of Irrfan Khan awards. The awards winning started from the academy award winner movie “Slumdog Millionaire” where he played the role of a police inspector. For the movie, Irrfan and the whole cast won Screen Actors Guild Award. 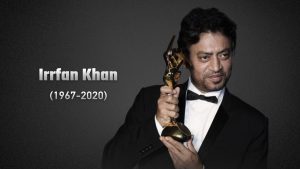 His role in Paan Singh Tomar turned things around in his career as he won the National Film Award for the best actor. The lunchbox also played a major role in his career as the movie won the Grand Rail d’Or at Cannes Film Festival. The movie received a BAFTA nomination, which made it the highest-grossing Hindi film to this date. He also received the Asian Film Award for the best actor in 2014. The list of awards he won is very long.

Suggested: Journey of Narendra Modi – The Prime Minister of India

In 2015, Irrfan Khan was appointed as the brand ambassador for Resurgent Rajasthan, a campaign by the State Government of Rajasthan. Irrfan Khan lent his voice to the light and sound show at the war memorial for the Indian Army at Vidhan Sabha Road, Jaipur.

He had a great career and the life of Irrfan khan made us realize that life is short and worth doing something that makes us known and remembers after we left. Sadly, the great actor was diagnosed with a neuroendocrine tumor in 2018. It was treated, he gained strength and made the last movie “Angrezi medium” that was released on 13th March 2020. He died at the age of 53 on 29th April 2020 due to a colon infection. His death took India by a heart-break surprise as we were not expecting the charismatic actor to leave us this world. The whole world mourned as a pearl went missing out of the ocean.

The full journey of Irrfan khan made sure that every movie of his should portray what acting is all about. Be it the Jurassic world, or Hindi medium, so does that in order to become a successful actor, you don’t have to rely on nepotism, there is always a vast space for talent.

People go and come into this harsh world, and some of them are so great that they can’t be forgotten because all the time when they were here, they were a true inspiration and idol for many.

The death of sahabzade Irfan Ali Khan has left a mark to the heart of every fan, Indian cinema, and the international filming industry. He has created many memories and it is something that can never be tampered and will always be cherished.