IPL 2021: List Of Players To Miss The Opening Phase Of The Competition

List Of IPL Players To Miss The Opening Phase

The bubble has fused the hopes of many fans worldwide who are gearing up to support their favorite team in the upcoming 14th edition of Vivo IPL.

As the build-up of the blockbuster event commences, the preparation of teams like Delhi Capitals, Mumbai Indians, and Chennai Super Kings will be impacted in the initial stage of the competition due to the unavailability of some of their star players. Proteas stars like Kagiso Rabada, Quinton de Kock, Anrich Nortje, David Miller, and Lungisani Ngidi will not be available for their respective franchises for the season opener.

South African players will be on national duty in the initial phase of IPL as they would be hosting Pakistan for 3 ODIs and 4 T20Is between April 02 and April 16. The ODI series that will commence from April 02 will be a part of the ICC Cricket World Cup Super League series. However, Cricket South Africa (CSA) has agreed to release the players who have IPL commitments before the T20I series, which will get underway from April 10. Once they land in India, they will have to follow the 7-14 days quarantine guidelines.

Here are the teams that will be affected the most by the unavailability of some of their star players.

Chennai Super Kings will be missing the services of Lungi Ngidi, at least in their opening contest. They are scheduled to face Delhi Capitals at the Wankhede Stadium in Mumbai on April 10. However, Chennai Super Kings CEO Kasi Vishwanathan confirmed to InsideSports that Ngidi would be joining CSK’s training camp after April 5.

He quoted, “Ngidi will join the team only after April 5. Ngidi will have to follow the same guidelines as others and will be put in quarantine once he arrives. Therefore he will not be available for selection for the opening game.”

The right-arm pacer wasn’t a regular member of the playing 11 last season, and his absence in the first game won’t hurt them massively. They have other seam bowling options in the overseas lot in the form of Dwayne Bravo and Sam Curran. 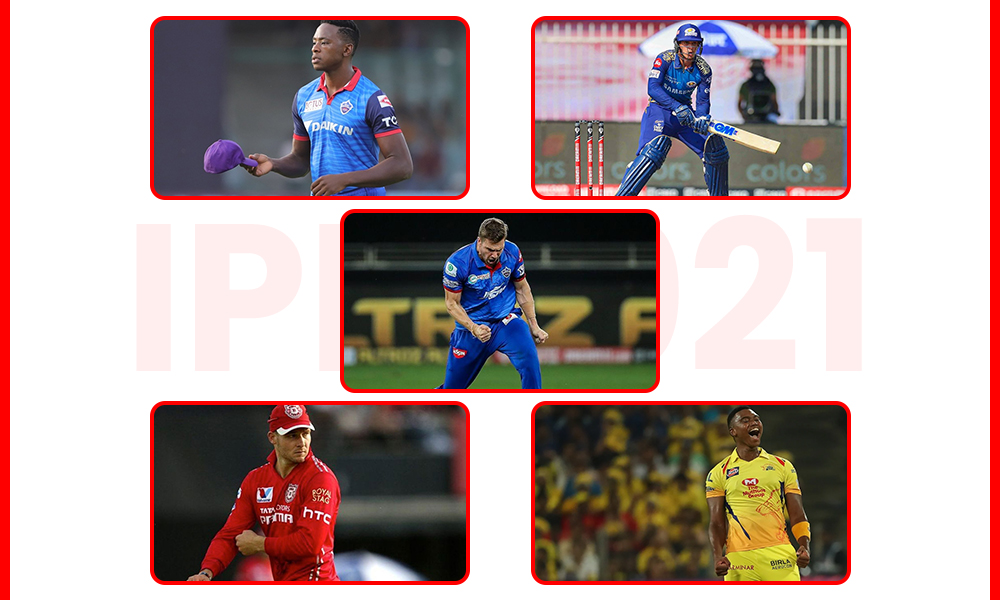 The RR team management has a lot to panic over the unavailability of star seamer Jofra Archer. The English pacer who didn’t feature in the recently concluded ODI series against India has returned to the United Kingdom for further management and investigation of his right elbow injury. The 25-year old will now be missing at least four matches for Rajasthan Royals.

Mustafizur Rahman and Andrew Tye are the other two seam bowling options from their international lot of players to replace Archer in the eleven.

Both Nortje and Rabada were instrumental in Rishabh Pant’s led Delhi Capitals’ successful journey to the final in the last season, and their absence for a game or two will be a void to fill. They possess a bunch of talented seamers in Chris Woakes, Tom Curran, Ishant Sharma, Umesh Yadav, and Lukman Meriwala, so it would be interesting to see how the Capitals will form their pace attack.

The 5-time champions Mumbai Indians will be missing the services of their prolific opener and wicket-keeper Quinton de Kock. The stylish left-hander is a part of the South Africa T20I squad and will be missing a game or two.

The MI team management has confirmed the news of de Kock’s unavailability for at least two games, and it seems like Chris Lynn will be partnering skipper Rohit Sharma at the top. The reigning champions will face-off Virat Kohli’s Royal Challengers Bangalore in the curtain-raiser of IPL 2021 at Chepauk in Chennai.

IPL 2021 is less than a week away, and all the teams are gearing up for an intense journey that will comprehend more than 50 days. Which team are you cheering this season? Do not forget to mention the name in the comment section.

8 Longest Rivers In The World