Recently, the Bollywood industry has seen the loss of great stars. The few stars namely Irrfan Khan, Rishi Kapoor, Saroj Khan left the world. What shocks everyone is the sudden demise of heart-throb Sushant Singh Rajput who allegedly committed suicide due to depression.

The loss of Sushant Singh Rajput has a throbbing ache in the hearts of everyone including friends, family, his fans, and sparked nothing short of national mourning.

When his last film for the industry was scheduled to release digitally amid the pandemic on one of the OTT platforms, the reaction was purgative. The Film’s release is overwhelming by itself and the audience has been waiting for more than a month since the dates of the release were published. The movie storyline is an adaptation of John Green’s ‘The Fault In Our Stars’ and leaves room for uneasiness in the heart.

The audience was aware of what they will be witnessing in the movie is friendship, pain, love, and loss. It is bound to carry the residual grief as we come in terms with the actor’s loss. To some, it is not less than to bid farewell to the actor, and to others, the closest thing to closure and a celebration of his life as the actor dives into his last character portrayal on-screen.

It is a lot to process at once, so for the review, I am going to try and analyze the film as a separate entity just like the way any other film deserves to be watched.

But first, let’s steer clear of every unpleasant discourse that you have been witnessing in the news or social media since the demise of Sushant. In the review, my focus will be on performance, plot, and music-driven. 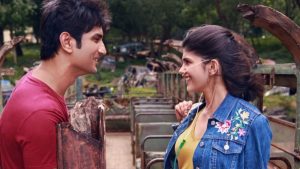 The movie Dil Bechara revolves around Kizie Basu (Sanjana Sanghi, the lead actress), a young college-going girl who is suffering through thyroid cancer. She is centered to deal with the mundanity of daily life with some skepticism she picked up after learning how fragile life can be. She is attached to an oxygen tank with tubes leading up to her nose to help her properly breathe.

Kizie, however, retains her sense of humor and is introduced as a funeral-crasher trying to share some of her emptiness with the world around her.

The regular life of Kizie goes on until her fate intertwines with Immanuel Rajkumar AKA Manny, a character who is always full of optimism and tonnes of energy. Manny is young, athletic, and has big dreams thwarted by osteosarcoma, a type of bone cancer that left him with a prosthetic leg.

Soon after the entry of Manny, the energetic character crashes his college event, taking the stage to perform ‘Dil Bechara friendzone ka Maara’ and approaches in the cliché Bollywood style.

Soon both the character develops a bond of friendship which is something new to the otherwise detached Kizie. The two come close in an endeavor to hold on to the simple joys of life with cruel fate looming large.

Relation With The Fault In Our Stars

If you have already watched ‘The Fault in Our Stars’, 2014 film starring Shailene Woodley and Ansel Elgort, you know how the story goes. It begins with Joy and ends seem to be an exercise in conviction.

Mukesh Chhabra in his debut directional takes on an adaptation full of possibilities. The source text of what revolves in the story is a teen drama with an emotional range to experiment with. Giving the story a Bollywood spin adds localizing the content to some extent.

Augustus’ ambitions are transformed into Manny’s filmy dreams and his love for Rajnikanth. He’s bent on his dream of making an amateur movie with his best friend JP. Hazel’s obsession with her favorite book’s author is replaced with Kizie’s obsession with a song title ‘Main Tumhara’ by musician Abhimanyu Veer.

She is vying to find him and get closure on why he left his music incomplete. The film shares the same structure of its predecessors and the recalls get increasingly repetitive as the plot of the movie progresses.

Suggested: BREATHE INTO THE SHADOWS: AN HONEST REVIEW

What Did I Think About It?

Coming down to the real stuff, Dil Bechara is full of tearjerker potential. The movie is based on one of the most heartbreaking teen stories and guarantees a feel-fast. In case, if you haven’t come up with the boxes of tissues, I suggest you get some.

The movie gets too close to home and dives a more realistic scenario. Watching the actor struggle with his emotions, his disease, and his relationship parallelly is difficult. The film gets its emotional effectiveness from the context of the unfortunate reality.

Sushant Singh Rajput’s performance is heart-touching making the movie difficult to watch without going in the state of ‘AWE’. The late actor takes on the role in fragments and works out the best output as always. We have encountered some of the most endearing performances of Hindi cinema. The actor has won the hearts of his massive fanbase with films like Detective Byomkesh Bakshi, Kai Po Che, Sonchiriya, M.S Dhoni: the untold story, Kedarnath and Chhichhore.

Sanjana Sanghi’s Kizie too has an earnest voice narration for the initial sequence of the film teasing a promising start. Her performance is moving upwards and holds up delightfully well for the majority of the film.

Sushant Singh’s final act in Dil Bechara is a bittersweet tearjerker. Dil Bechara has its moments but none of them stick around to make an impact. And I only think of one thing- Will the film be etched in my memory or the users?